GACA: The ICAO supports plans and development of countries in the field of international air transport


The International Civil Aviation Organization (ICAO) is an agency of the United Nations, whose objective is to supervise the principles and arrangements concerned with international civil aviation. The ICAO is to ensure safe and orderly development of civil aviation, and achieve the establishment of international air transport lines on the basis of equal opportunities and their investment in an economic and peaceful manner.

The ICAO has several roles, which includes: setting international policies and standards, conducts audits and compliance with international rules and recommendations, conduct economic and technical studies and analysis. Further, it provides assistance and build aviation capabilities through many other activities in cooperation between its member states and stakeholders.

The ICAO is one of the United Nations specialized technical agencies in the field of international civil aviation. It consists of (193) Contracting States, which contribute to the budget of the Organization in accordance with the standards used in the United Nations.  The Ordinary General Assembly of the Organization elects a permanent council every three years from the (36) a state. The election is for the next triennium, which begins immediately after the end of the work of the General Assembly, and the elected states are represented in the Council by permanent delegates for the purpose of supervising and following up the implementation of the decisions of the past general assemblies. Further, it follows up on the rapid response to changes in one of the most dynamic and changing industries.

According to the Convention on International Civil Aviation (Chicago Convention 1944), the Council consists of (36) seats, divided into three categories: “Category One” are the countries of main importance in the field of air transport, and the General Assembly usually approves the allocation of (11) seats.  The "second category" is reserved for the countries that make the greatest contribution to providing facilities for international civil air navigation, and it is customary for the General Assembly to approve the allocation of (12) seats to it. Plus the "third category" that is dedicated to ensuring equitable geographical distribution, and it is customary for the General Assembly allocates (13) seats for it.

In this regard, the Kingdom of Saudi Arabia is among the candidates of the Arab bloc in the elections that will be held in Rabat, Morocco during the Extraordinary General Assembly at the end of May 2022. The member states of the regional blocs are morally obligated to exchange support with their counterparts in the other blocs, and accordingly, if the Kingdom is among the candidates within the Arab bloc, then the percentage of winning a seat in the ICAO Council will be very high. This shows the importance of the Kingdom being among the Arab bloc's candidates in the elections, and this ensures a large percentage of support for the Kingdom's candidacy. As for the rest of the countries that are not part of any bloc, support is exchanged with them bilaterally.

It highlights the importance of the Kingdom being among the candidates of the Arab bloc for a seat in the ICAO Council through candidacy through the regional bloc for several considerations, most notably: The Kingdom’s ability to protect Arab interests in the field of civil aviation in terms of its international political and economic standing, as the Kingdom is among the G20 countries, and has the largest Flight Information Regions (FIR). Further it provides air navigation services linking the three continents of the world (Asia, Africa and Europe), which is in accordance with the definition of ICAO for the second category countries of the Council. This in addition to the fact that the Kingdom is the largest market for air transport in the region and is supported by the presence of 29 airports spread over a large area of ​​the Kingdom.

The Kingdom of Saudi Arabia also provides search and rescue services in the Middle East via satellite (COSPAS-SARSAT), it has a training academy accredited by the (ICAO), and within the "TRAINER PLUS" program. The Kingdom permanently provides free training seats to Arab and African countries, in support of ICAO’s plans in the Middle East region by taking the initiative to develop a regional plan for aviation security and facilitation in the region (Riyadh Declaration - March 2019). Meanwhile, another conference will follow in the first quarter of 2022, to follow up the progress of the outputs of the Riyadh Declaration, and discuss the most prominent challenges facing the sector  International air transport.

In addition to the above, the Kingdom hosts and sponsors the operation of the headquarters of the Middle East and North Africa Regional Safety Oversight Organization (MENA-RSOO), the Cooperative Aviation Security Programme Middle East (CASP-MID). It also provides support for the (ICAO) initiative “No Country Left Behind” (NCLB), an initiative that support civil aviation safety, security and facilitation programs in the Arab countries, African countries and the Indian Ocean through financial and technical contributions. The most recent of which was the donation of the Custodian of the Two Holy Mosques (God protect him) of one million US dollars in 2016, proceeded by one million US dollars in 2019 and fifty thousand US dollars in 2021 to support this initiative.

Furthermore, with the challenges posed by the COVID-19 pandemic related to public health and the operational and economic impacts on the air transport industry around the world, and in Africa and the Middle East in particular. The Kingdom of Saudi Arabia has been able to achieve digital transformation through the digital health passport and its link with IATA. Moreover through the generous support and revitalization of the civil aviation sector, which directly contributed to facilitating travel procedures and verifying the health eligibility of travelers according to the best international practices of civil aviation legislation to protect the rights of travellers and stakeholders, and revitalize the aviation sector. 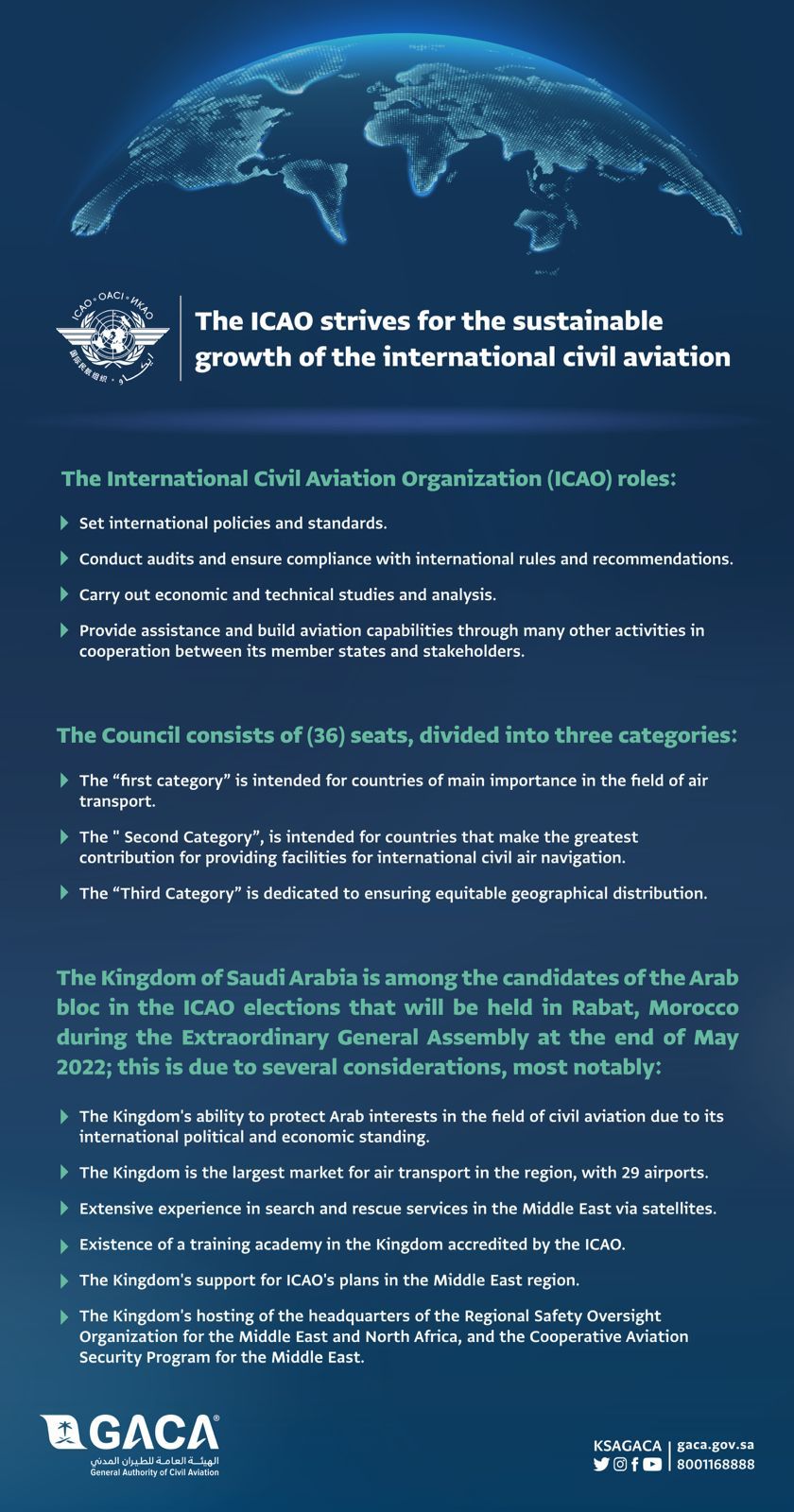